Tips to get the best from your Septic Tank

Definition of a Septic Tank: A septic tank is not a closed system. It receives waste water and sewage from a dwelling where the solids sink to the bottom of the tank forming a sludge layer, and oils and grease float to the top forming a scum layer. Bacteria in the water begins to break down and partially treat the sewage before excess water is discharged from the septic tank to the surrounding soil via some form of soakaway. Further breakdown of the sewage occurs in the soil.

We advise that the three most important things to remember about your septic tank system are:

•Don't overload the septic tank . This can cause overflowing, which can create a health hazard and pollute nearby water courses.
•Have the septic tank pumped out at least once every year. All septic tanks need pumping to remove sludge and scum buildup which, if left, may wash out of the tank and into the soakaway, limiting its effectiveness.
•Do not put strong or hazardous chemicals into the septic tank system . Septic tank systems are designed to treat household domestic sewage using bacteria, which can be harmed by substances such as paint, thinners, solvents, pesticides and flammable liquids. Also, these chemicals could flow out of the system and contaminate surrounding water courses.

In addition, following these tips will help keep your septic tank system from becoming a problem:
•Keep grease out of the septic tank system - it blocks up the works and reduces bacteria action.
•Other than toilet paper, don't put paper products such as cigarette ends, sanitary products, paper towels and nappies into the septic tank.
•Don't drive over, walk over or otherwise compress the soil in the soakaway - this makes it less effective.
•Don't connect surface water drains to the septic tank - it does not need to be treated.
•Water from a washing machine should go into the septic tank but try to spread this over the week rather than several loads in one day.
•Find ways to conserve water by reducing the amount used to flush the toilet and install low-flow shower heads.

Tips to get the best from your Cesspit (Cesspool)

Definition of a Cesspit or Cesspool: A cesspit or cesspool is a closed system, and simply acts as a holding tank for waste water from a dwelling whilst it awaits collection and disposal.

Because a cesstpit is a closed system there is little that cannot go into it. However, for safety reasons, flammable liquids such as petrol and paint thinners etc. should not be allowed to enter it.

Also because a cesspit is a closed system, it will need emptying more frequently than a septic tank and the level should be checked regularly.

To avoid damage to the cesspit, do not drive vehicles over it. 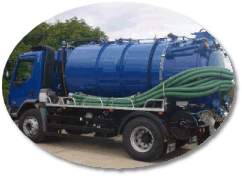 We offer a complete service